The active work of Mayor Plamen Stoilov and his team and the municipal administration was highly recognised by a number of prestigious national and international institutions and organisations.

Аt an official ceremony during the 13th Annual meeting of local authorities, organised by the National Association of Municipalities in the Republic of Bulgaria (NAMRB), the Deputy Mayor for European Development and Chairman of the Managing Board of Ruse Free Spirit City Municipal Foundation Dr Strahil Karapchanski received the award “Partner of the municipalities”. The prestigious award was presented to him by the Deputy Chairman of NAMRB and Mayor of Dimitrovgrad Ivo Dimov. The award, which the Foundation received, is a recognition for the fact that during the first 9 months of 2018, it has implemented 4 joint projects with Ruse Municipality in the fields of culture, arts and sports.

Ruse Municipality was awarded the European Label for Innovation and Good Governance at Local Level.

The prestigious award certifies high quality governance achieved by the municipality and its commitment to apply the European principles of good governance. The award validity period is 2017-2019. 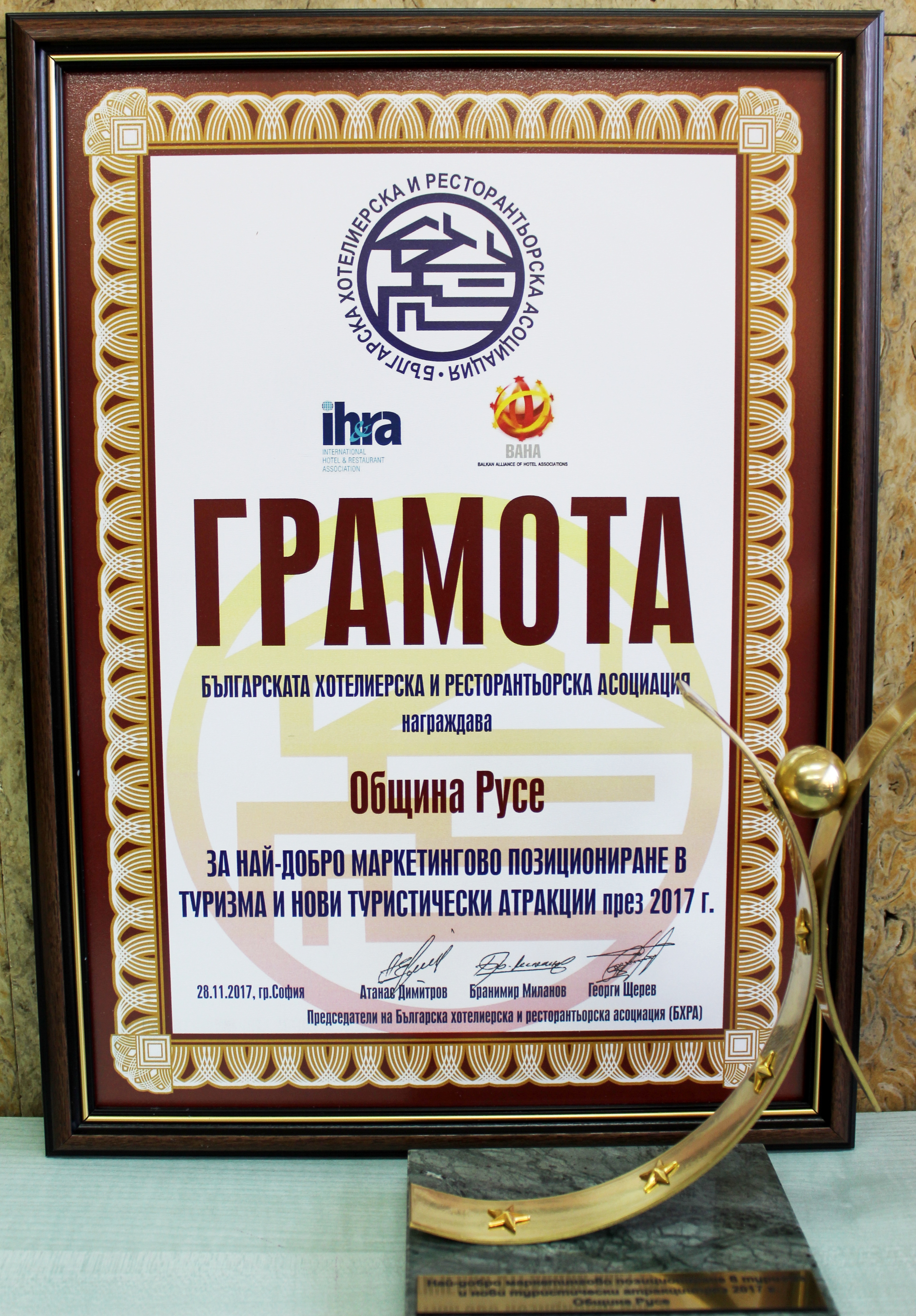 At an official ceremony of the Bulgarian Hotel and Restaurant Association (BHRA) for awarding theTwenty-second Annual Awards for professional achievements in the field of tourism, Ruse Municipality was awarded a plaque and diploma for “Best marketing positioning and new tourist attractions in 2017”. 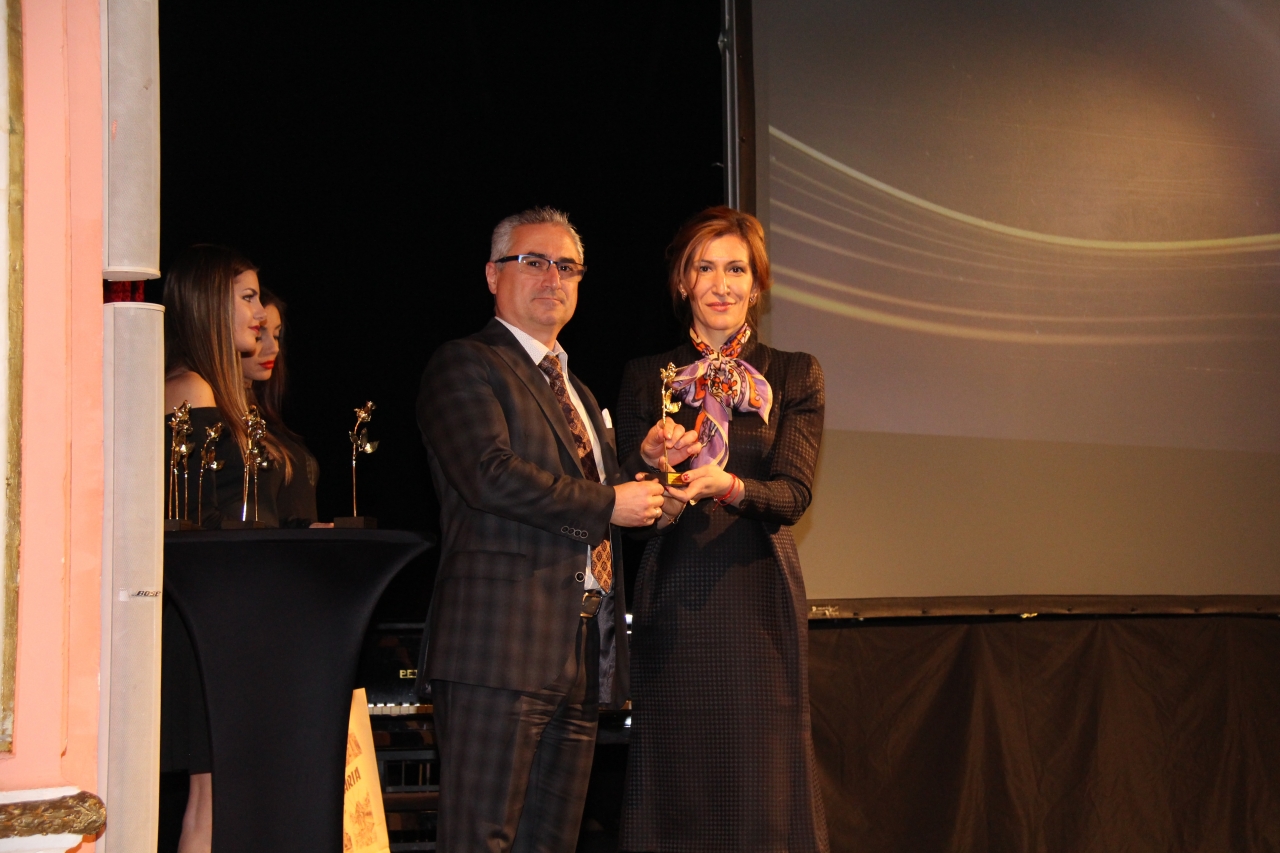 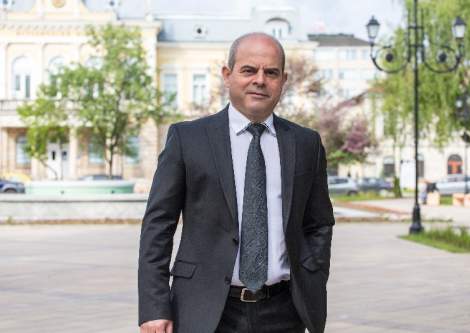 During an official ceremony in Sofia, 16.11.2016, the Mayor of Ruse Plamen Stoilov won the award “Mayor of the Year”. It is awarded for the fourth consecutive year by the Portal of Bulgarian municipalities Kmeta.bg. Ruse Municipality was awarded for outstanding contribution to the integration of visually impaired people during a ceremony dedicated to the 95th anniversary of the Union of the Blind in Bulgaria. The Association has 16 regional organisations with 106 territorial structures, carrying out their activities on the territory of the whole country. 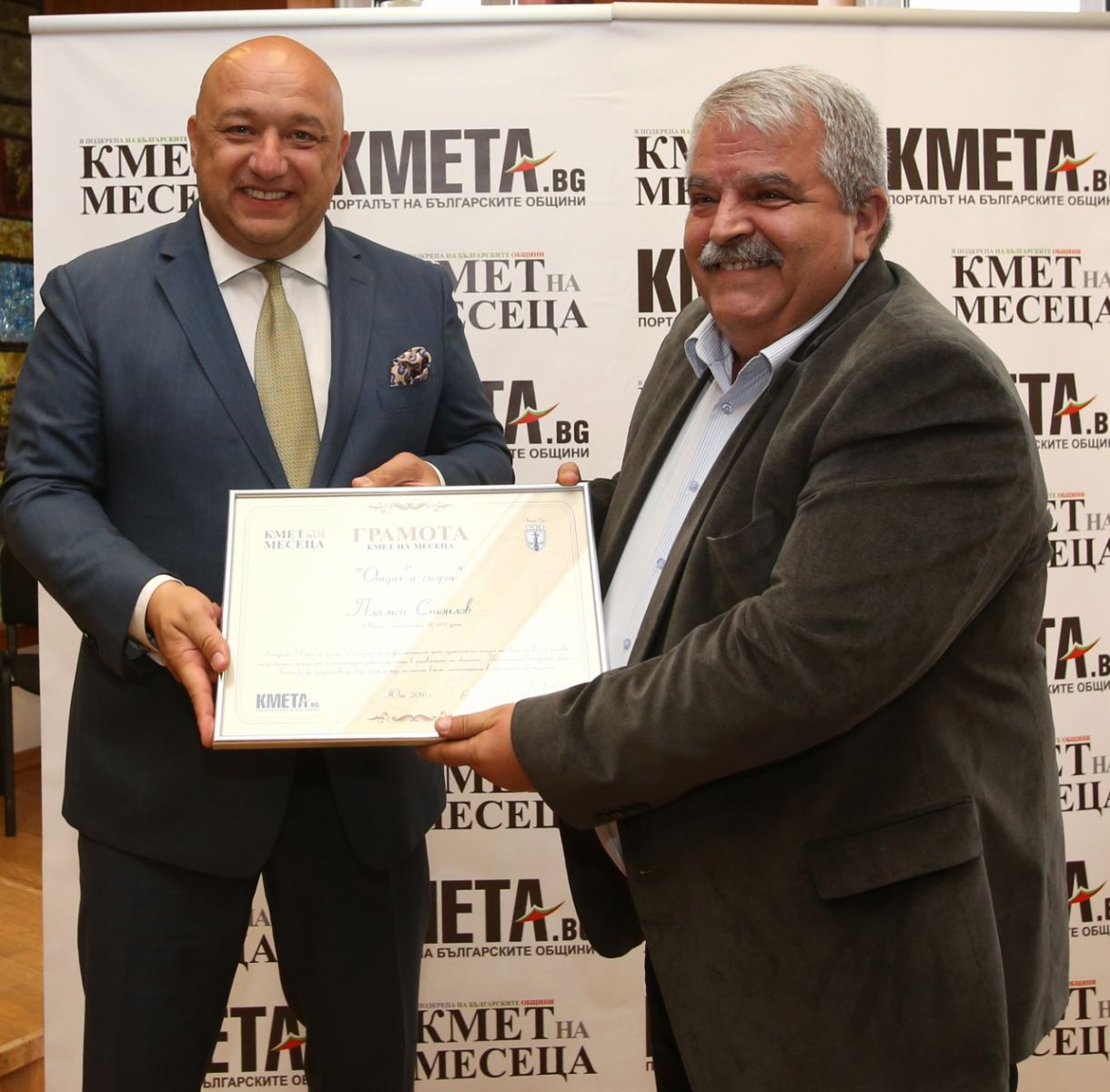 During an official ceremony at the Ministry of Youth and Sports in Sofia were presented the “Mayor of the Month” awards for July 2016 in the “Recreation and Sports Activities” category. Ruse Municipality was among the winners in the category. 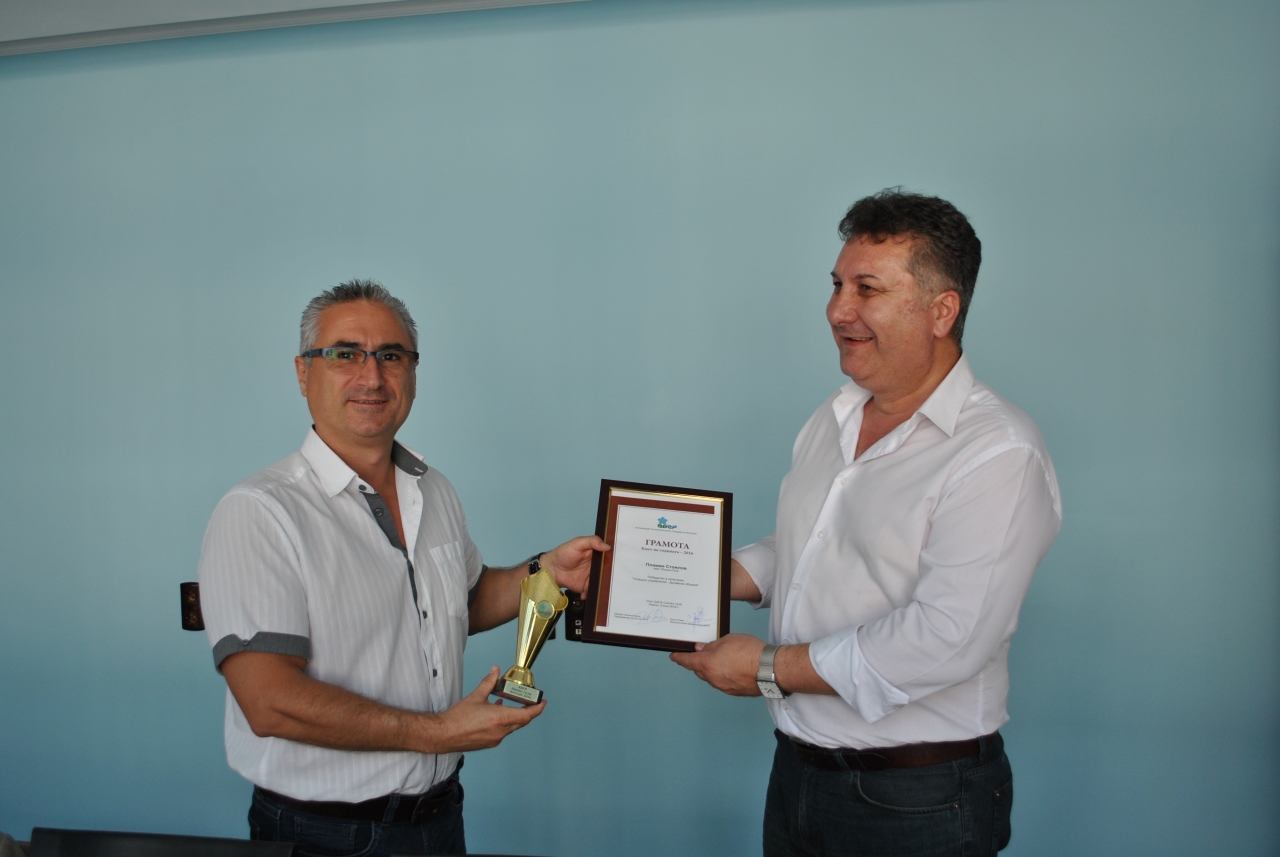 The Deputy Mayor for Spatial Planning eng. Dimitar Nakov was presented with an award for Ruse Municipality in the category “Successful management of Danube municipality” by the Association of Bulgarian Cities and Regions. At an official ceremony in Sofia, the city of Ruse was awarded “Most promising city” and “Best city to live in 2015”. Prizes were also awarded in the following categories – “green city”, “guardian of history”, “investor in sports talents”, “business city”, “successfully implemented EU project’’. 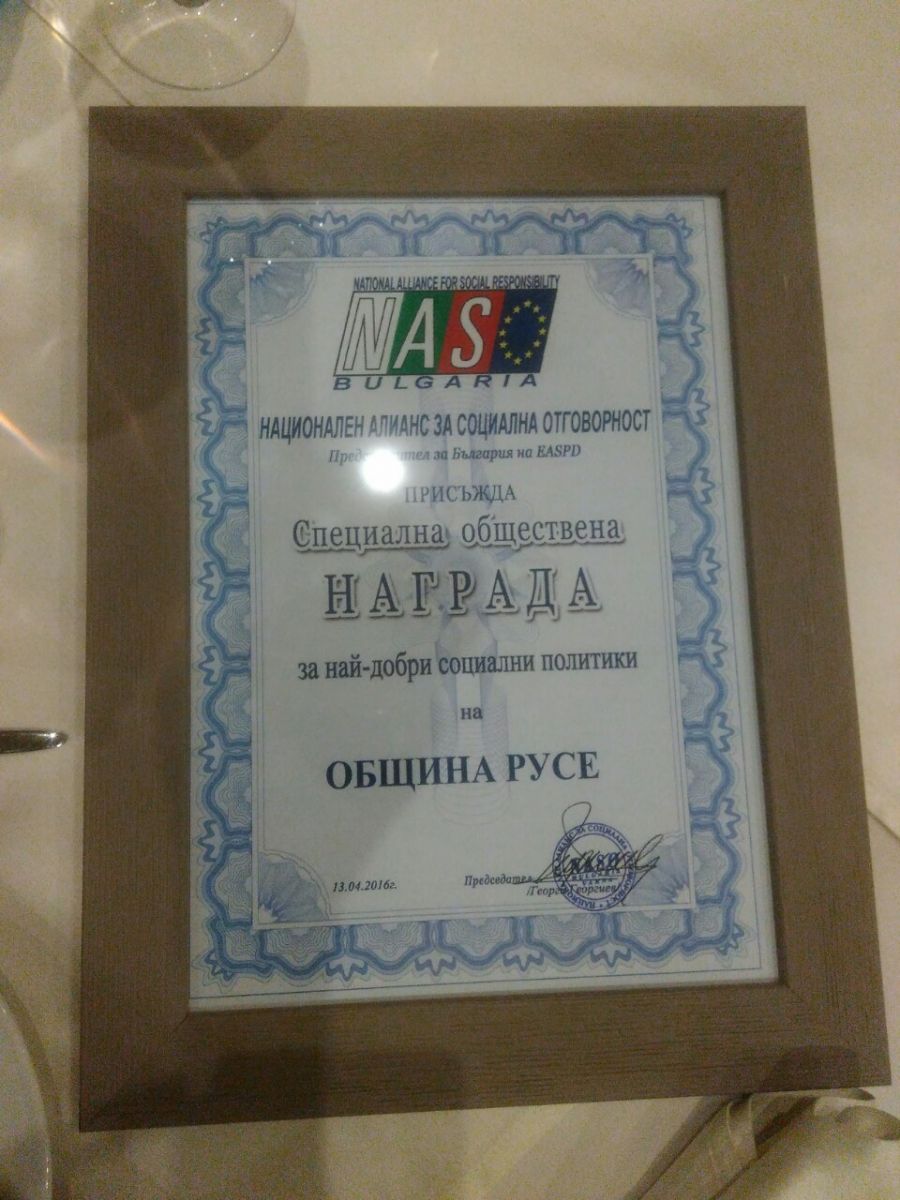 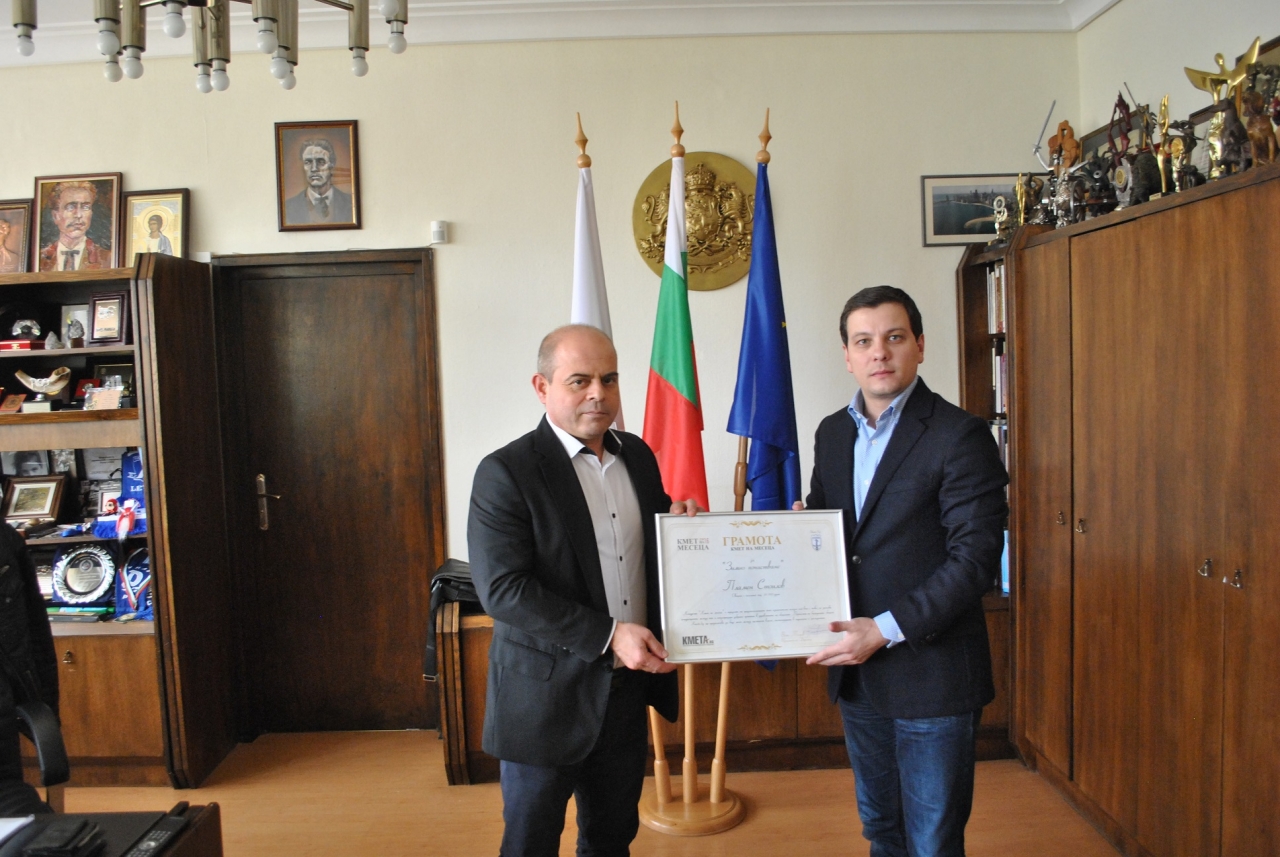 The Executive Director of Kmeta.bg Boyan Tomov presented the Mayor of Ruse Plamen Stoilov with the award “Mayor of the Month” for February 2016. Mayor Stoilov won the award by receiving 56% of the vote in the category “Municipalities with population more than 50 000 people”. Two projects of Ruse Municipality were awarded in the “Urban Environment” category by the 30-person jury of the initiative “INFRASTRUCTURE BULGARIA AWARDS 2016”. These are the projects “Integrated System for Urban Transport of the city of Ruse” and “Rehabilitation and accessible urban environment of central city area – a section of Aleksandrovska Street, Battenberg Square and the adjacent spaces”.

The initiative “INFRASTRUCTURE BULGARIA AWARDS 2016” is under the auspices of the Ministry of transport, information technologies and communications, the Ministry of Regional Development and Public Works, the Ministry of Environment and Waterwith the support of the industry and professional organisations in the sector. 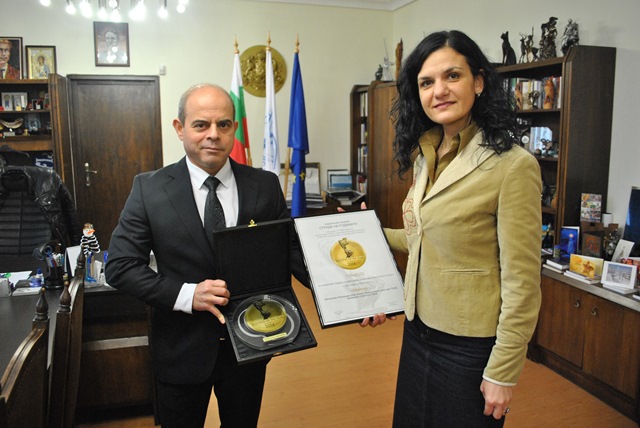 The eco-museum received a special award and diploma in category Buildings - modern cultural infrastructure in the 2014 Building of the Year contest. 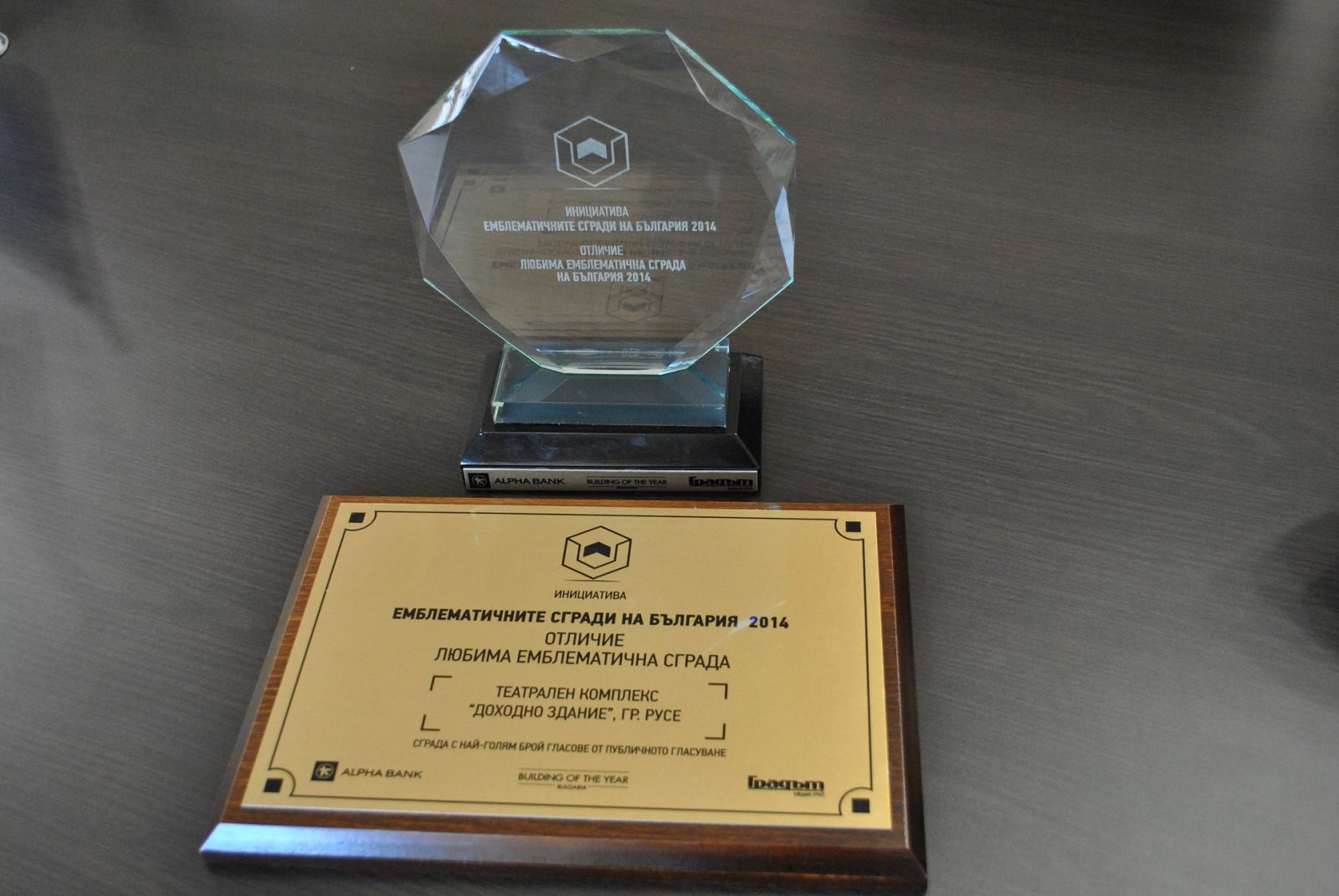 At the Annual Information Conference of Operational Programme Regional Development, the project of Ruse Municipality "Improvement and accessible urban environment in the central city barea - a section of Aleksandrovska Street, Battenberg Square and the adjacent areas” received the Award for most successful project in the Green and Accessible Urban Environment category.

Ruse Municipality received a Plaque for outstanding contribution to the motor sport for season 2014 from the Bulgarian Automobile Sports Federation. Ruse Municipality was awarded the prize for the large-scale car race that annually takes place in Ruse.

National Prize Golden Euro for achieved highest results in the management of European funds.The prize is awarded to Ruse Municipality for successful project management, improvement of the local economy and creating new jobs through the absorption of European funds. 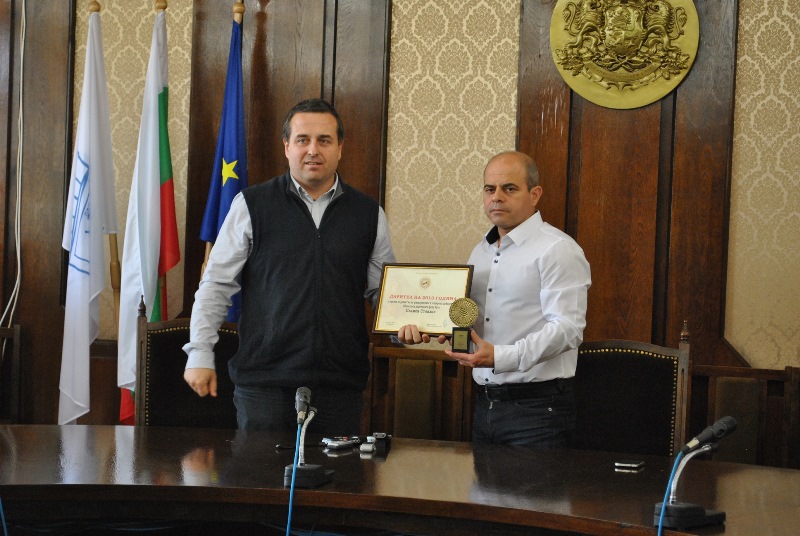 The Association of Public Foundations in Bulgaria awarded the Mayor of Ruse Municipality with the 2013 Donor of the Year Award for the good cooperation and the support that the local administration provides to Foundation "Public Fund - Ruse".

Mayor Plamen Stoilov was nominated by the Portal of municipalities Kmeta.bg for "Mayor of the Month" in the “Festivals” category. Internet users voted the Mayor of Ruse Municipality "Mayor of the Month" because of this year’s successful edition of the festival for contemporary urban culture "I, the City". 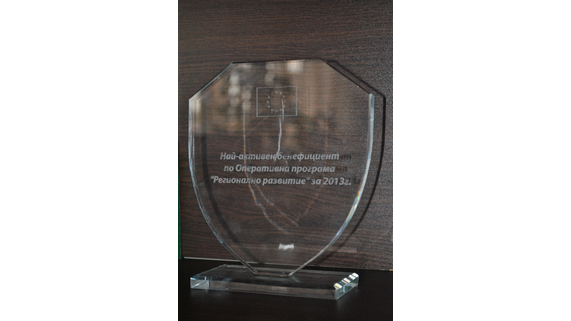 The prize was awarded at the annual conference of OP "Regional Development in 2013. 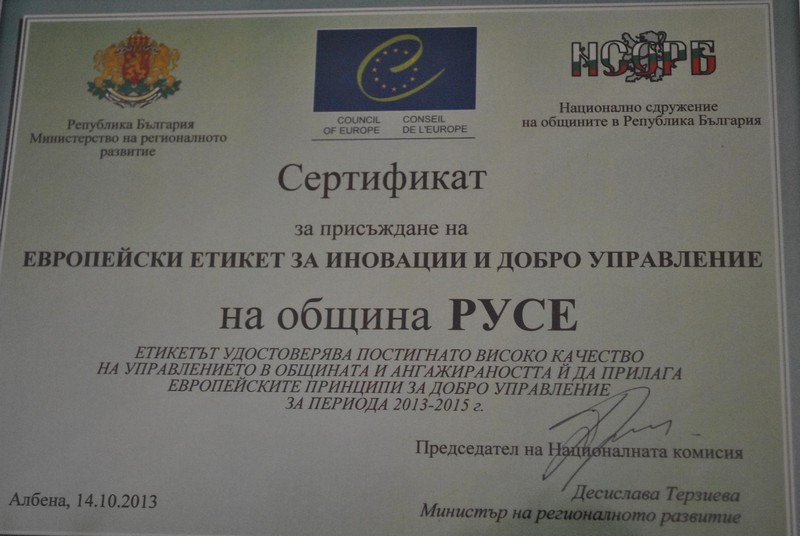 The European Label of Innovation and Good Governance at Local Level is a certificate of the overall quality of management in the municipality. The award, created to distinguish local authorities in Europe, is a recognition of the successful implementation of the principles of good democratic governance, the quality of public services and best practices in the implementation of public policies in Ruse Municipality. It is a symbol of prestige and incentive for municipalities to improve their management in the service of civil society. The validity period of the prize is 2013-2015.

The diploma is accompanied by a crystal sphere on which are inscribed the major categories in which Ruse Municipality was awarded the prize for: 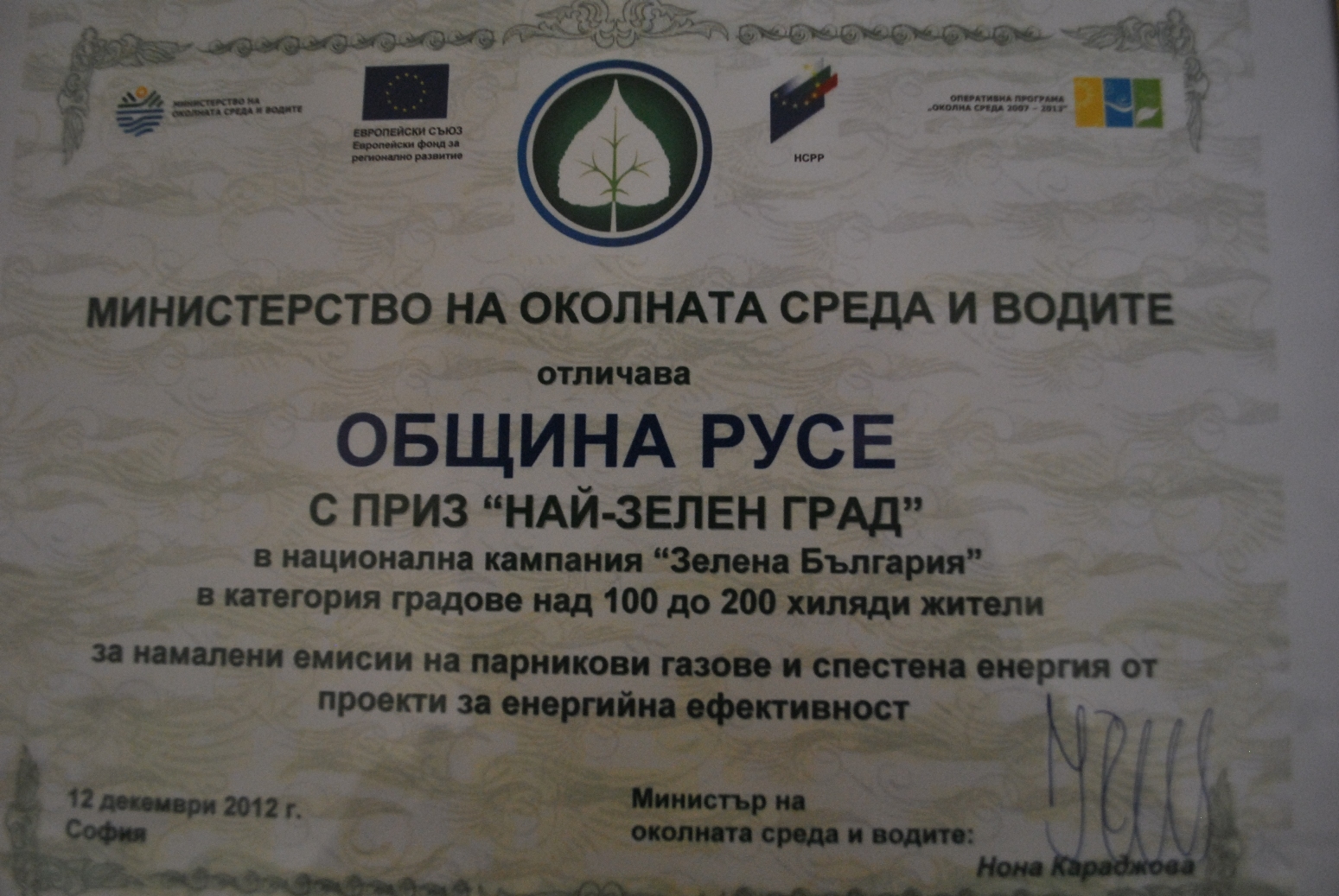 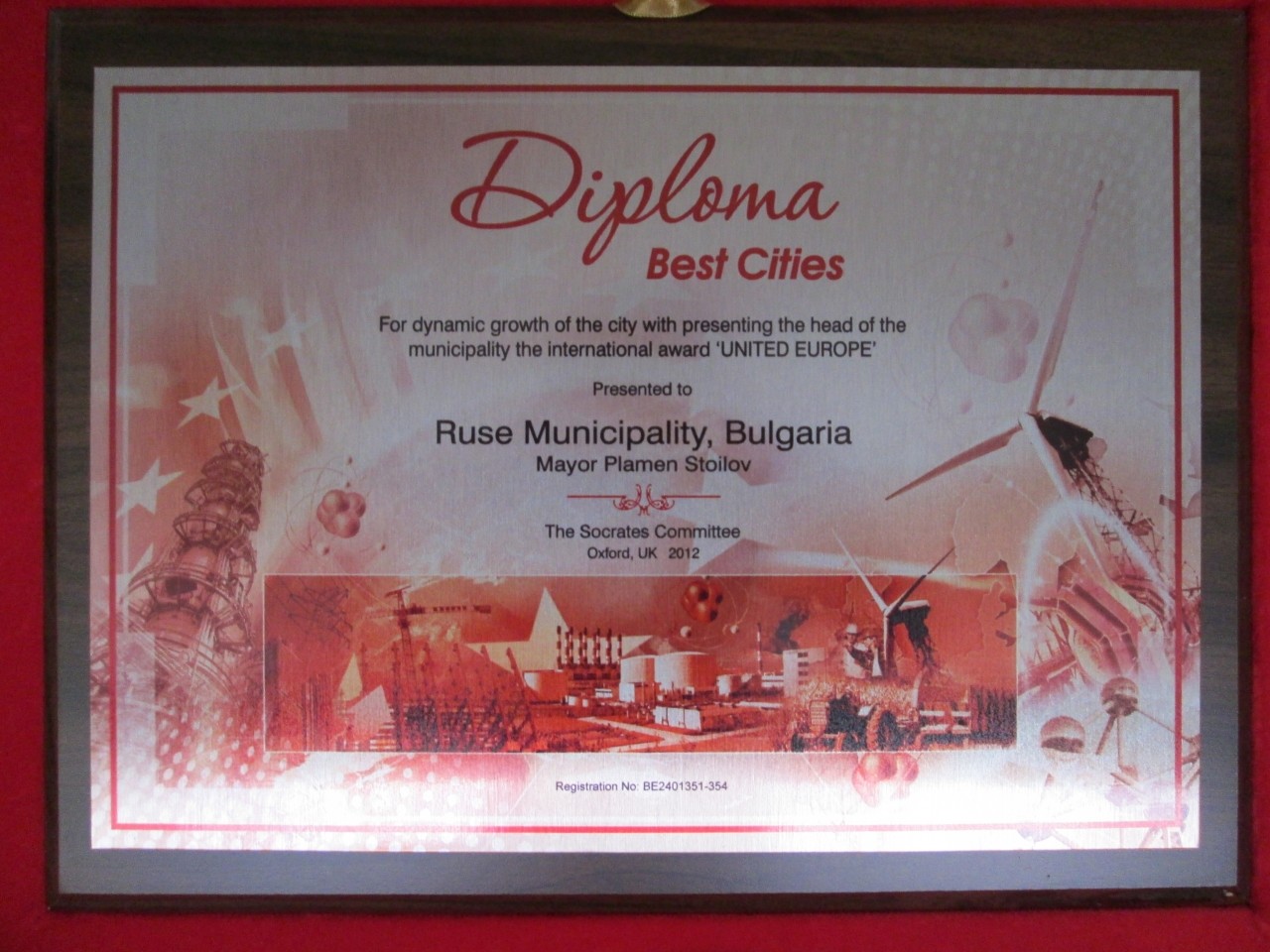 United Europe International Award for personal contribution to the development of European integration, awarded by the European Business Assembly along with a certificate to use the quality trademark "Best Cities" for 5 years. 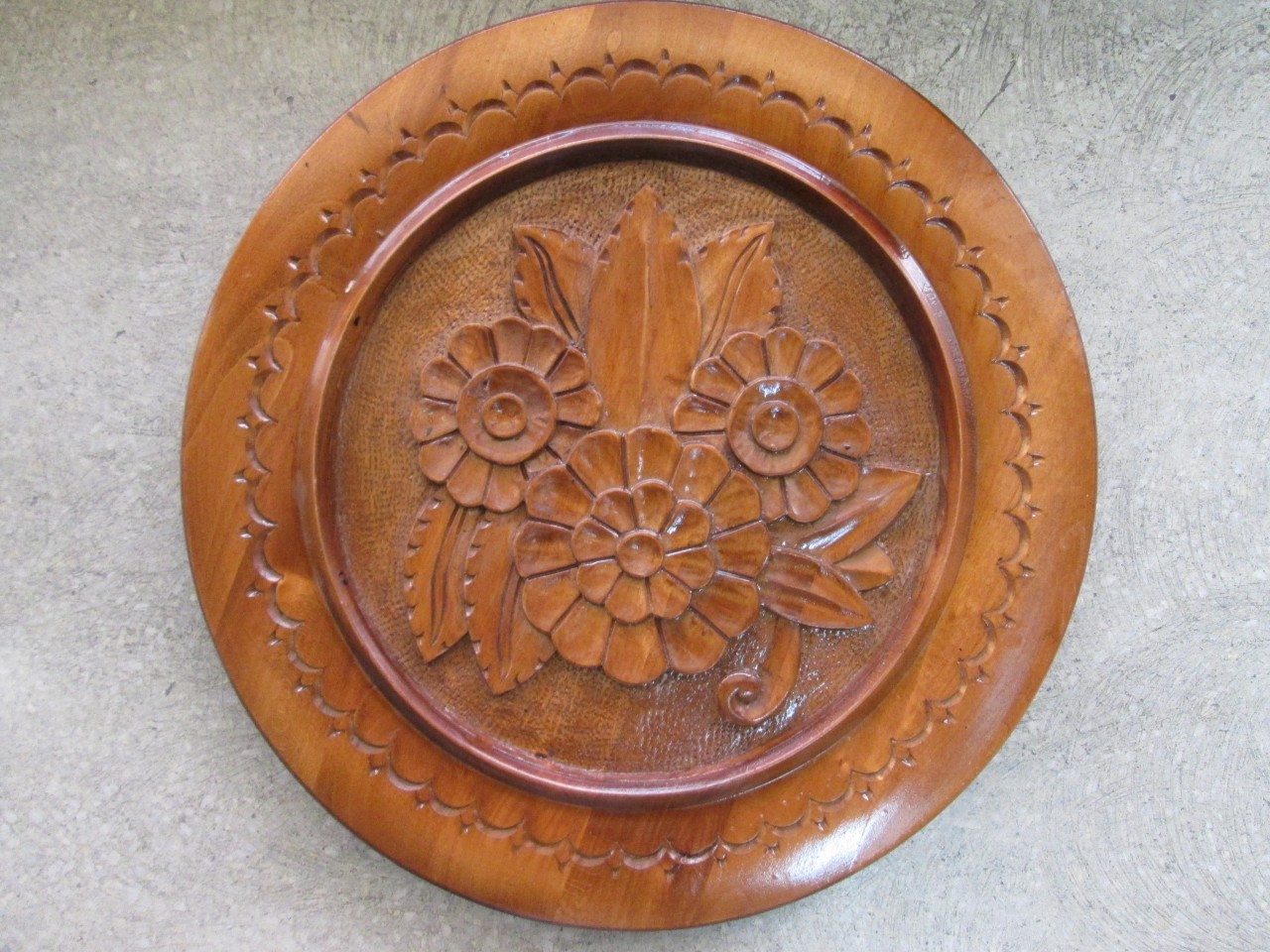 Most Active Municipality Award, received at the Annual conference of Operational Programme "Regional Development" in 2012. 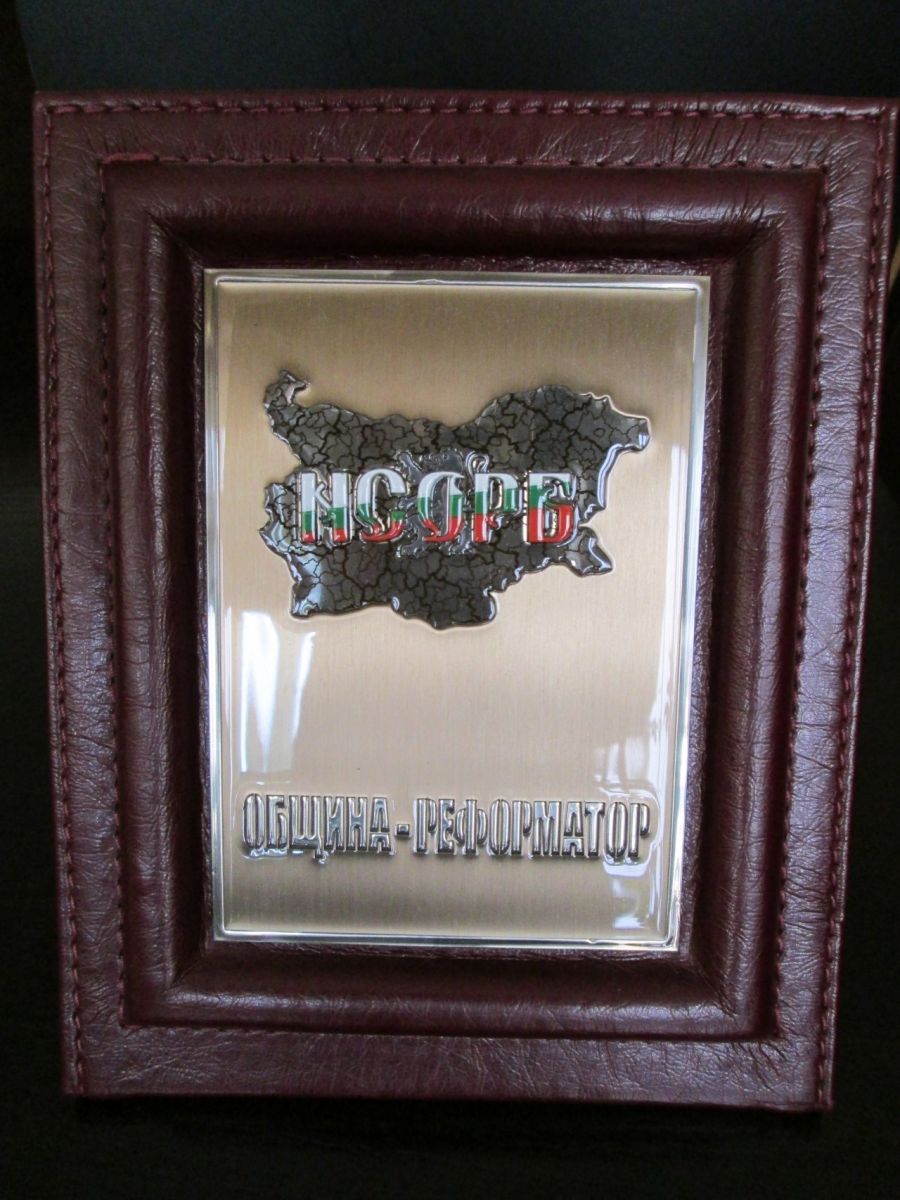 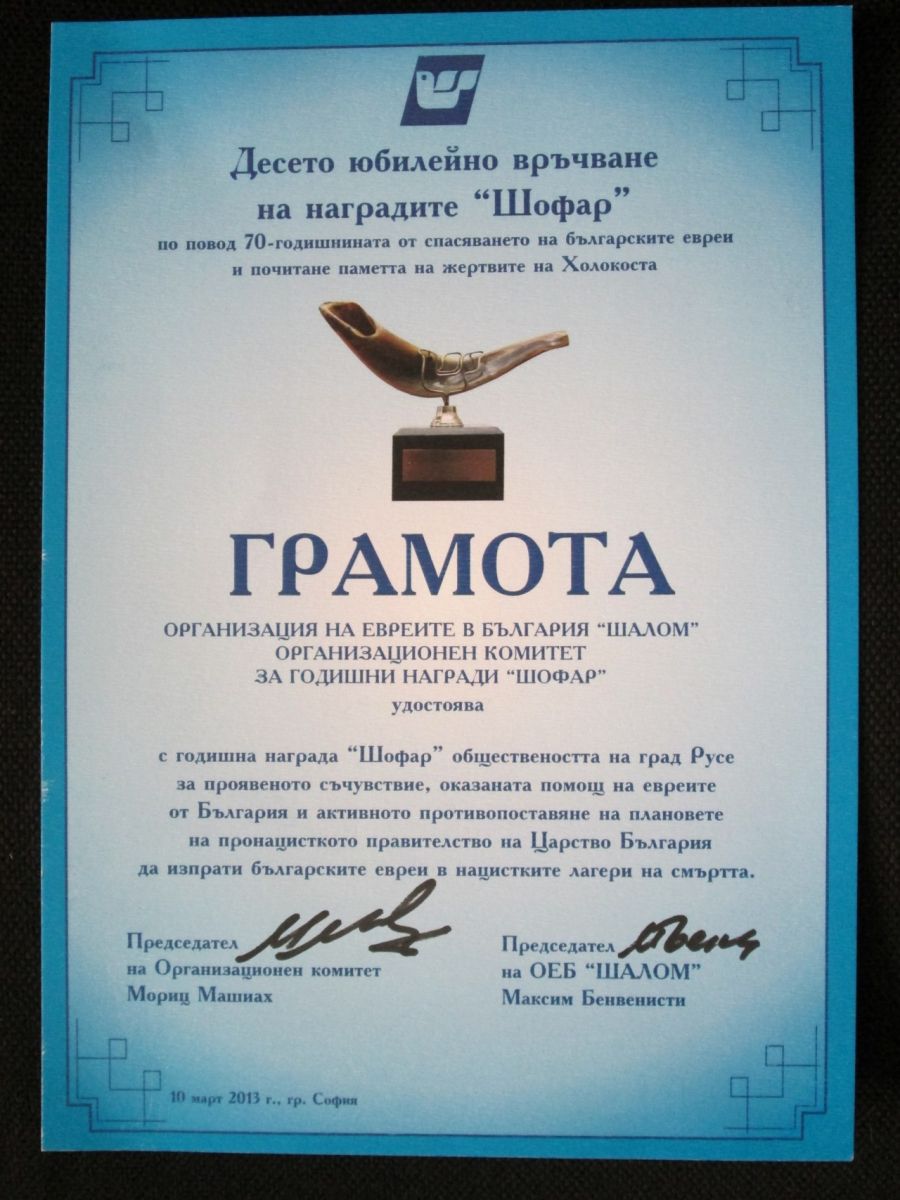 The Shofar Award awarded to the community of Ruse by the Organisation of Jews in Bulgaria – Shalom. 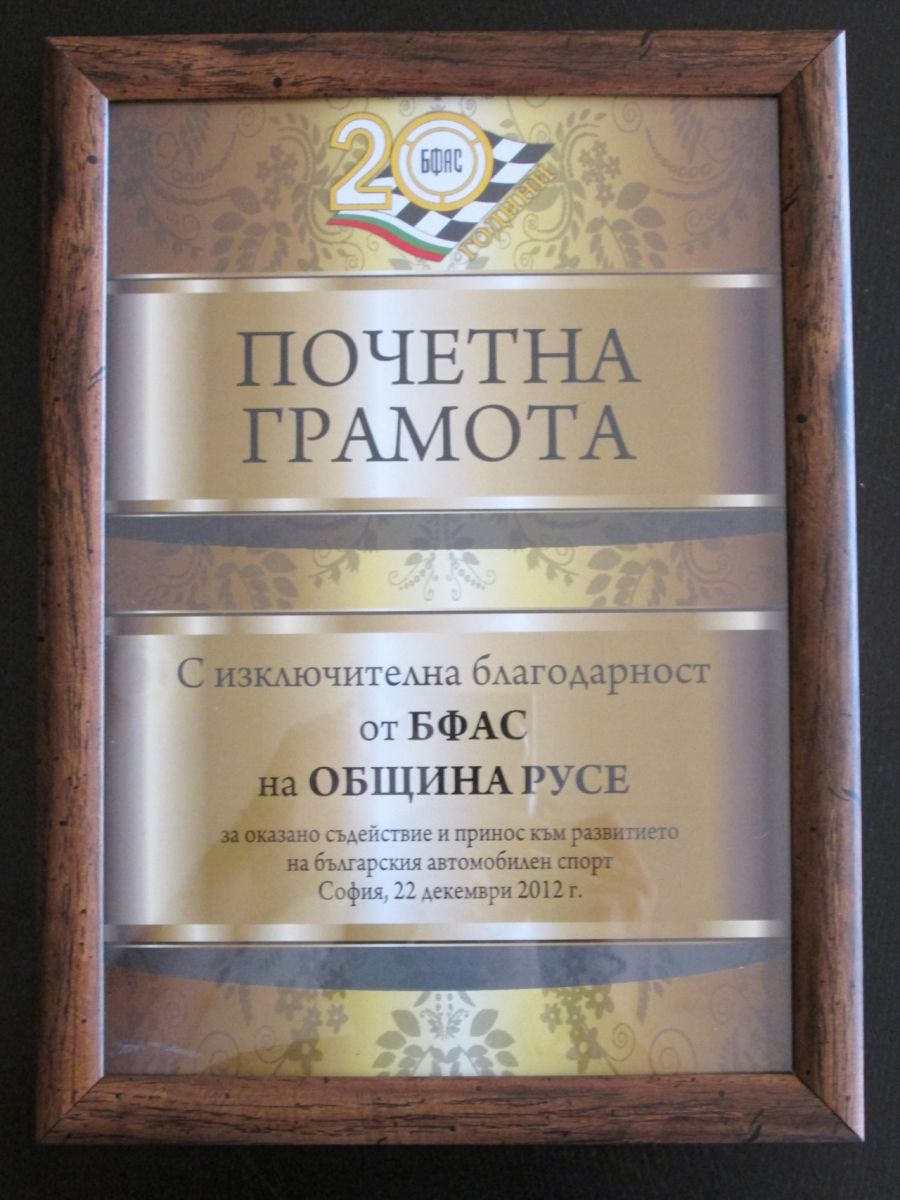 Honorary diploma from the Bulgarian Automobile Sports Federation on the occasion of the 20th anniversary of the organisation.